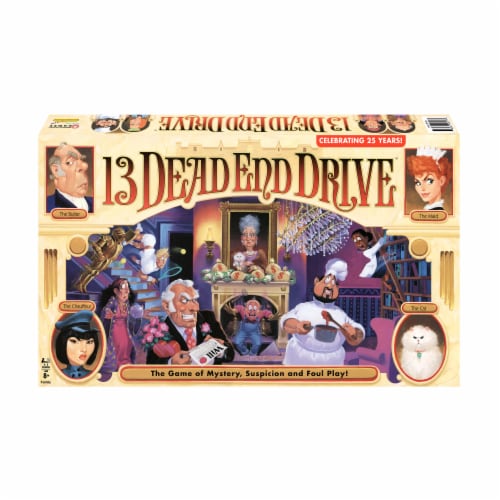 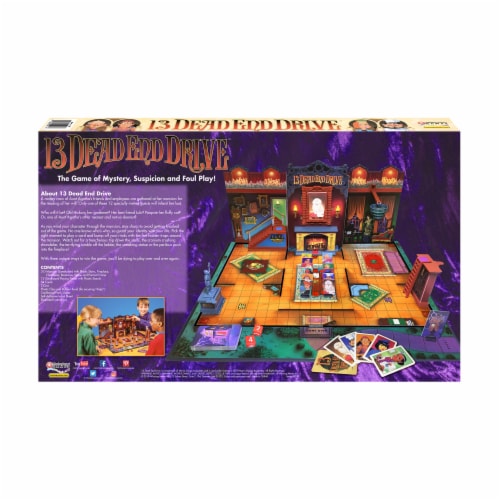 13 Dead End Drive is the game of mystery, suspicion, and foul play that first hit the scene in 1994. Now this fan favorite is back, by popular demand, to entertain a whole new generation. A motley crew of Aunt Agatha's friends and employees are gathered at her mansion for the reading of her will. Only one of these 12 specially invited guests will inherit her loot. Who will it be? Old Hickory her gardener? Her best friend Lulu? Poopsie her fluffy cat? Or, one of Aunt Agatha's other nearest and not-so-dearest? As you wind your character through the mansion, stay sharp to avoid getting knocked out of the game. No one knows who's who, so guard your identity with your life. Pick the right moment to play a card and bump off your rivals with the five hidden traps around the mansion. Watch out for a treacherous trip down the stairs, the cranium crushing chandelier, the terrifying tumble off the ladder, the smash statue, or the perilous push into the fireplace! With three unique ways to win the game, you'll be dying to play over and over again.

13 Dead End Drive is a bluffing game where you try to conceal your identity. On your turn you move two character pawns on the board. Movement is decided by dice. The board is a 3D house with several traps. If you move a character to a trap space, you may spring the trap if you have the corresponding card in your hand. You can bluff by moving your opponents' characters towards the entrance or moving your own character onto a trap space, but not release it. The portrait above the fireplace contains cards for each character, plus Aunt Agatha. When you roll double, you change the portrait. You can win the game in three different ways: 1) If you can move your own game character out of the house when it's same as the portrait on the wall, 2) If your game character is the last surviving, or 3) If you character's portrait is on the wall when the detective enters the main entrance.