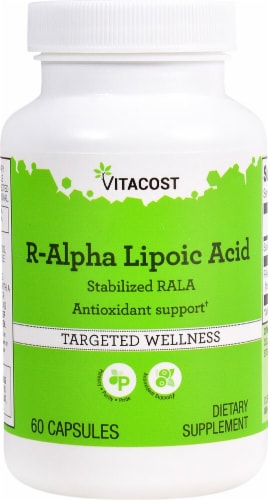 What is R-Alpha Lipoic Acid?

R-Alpha lipoic acid (RALA) is the naturally occurring form of lipoic acid, a nutrient present in every cell of the body, essential to chemical reactions that allow the body to produce energy.* The body produces very little alpha lipoic acid and it is difficult to obtain sufficient quantities through diet alone.

Lipoic acid has been called “a universal antioxidant” because it’s effective as an antioxidant in water-based environments, such as blood, yet its reduced metabolite, dihydrolipoic acid (DHLA), is also effective in protecting fatty tissues and membranes.*

The "R" form is considered the biologically active form, identical to that produced by the body. Unlike other forms of lipoic acid, RALA is bioavailable and more stable in the body.

What are the key benefits of Vitacost® R-Alpha Lipoic Acid Stabilized RALA?

Nutrition Facts
60.0 servings per container
Serving size
Amount per serving
Calories
% Daily value*
Sodium10mg0%
*The % Daily Value (DV) tells you how much a nutrient in a serving of food contributes to a daily diet. 2,000 calories a day is used for general nutrition advice.