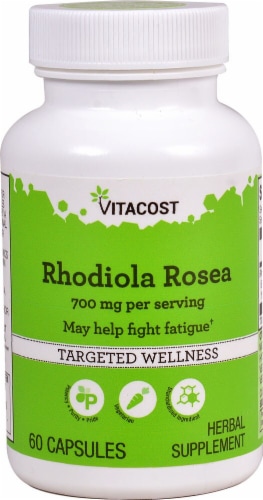 Rhodiola rosea is a plant that grows in dry, cold areas in the mountainous regions of Europe and Asia. It has been a dietary staple in many Eastern European and Scandinavian populations for centuries. While research has been conducted on the plant in some areas of the world, only recently has the West begun to investigate its health benefits. The roots have been used primarily to help with resistance to physical stress.*

Rhodiola rosea has been categorized as an adaptogen by Russian researchers who observed its ability to increase resistance to a variety of chemical, biological and physical stressors.* Traditional uses of Rhodiola rosea include fighting fatigue and the enhancement of physical and mental performance.*

There are over 200 species of Rhodiola, and Rhodiola rosea is generally considered preferable, due to the presence of rosavins. High-quality supplements generally contain a minimum of 3% rosavins.

What are the key benefits of Vitacost Rhodiola Rosea - Standardized?

Vitacost Rhodiola Rosea - Standardized is a targeted wellness solution - just for you.